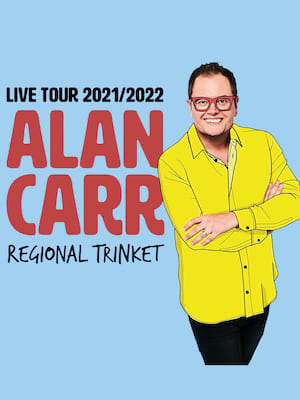 Everybody's favourite chatty man is stepping off our screens and onto stages across the country this year as he sets off on tour for the first time in four years. Titled 'Not Again, Alan!' this new show sees Alan delve into all the weird and wonderful situations he's bounced through in recent years, which include getting married by Adele in 2018 and buying a farm.

Known for his outgoing and outrageous camp style, Alan Carr is definitely in the running for national treasure status. The host of the hilarious Chatty Man for 16 series, a BBC Radio 2 regular and a judge on the inaugural series of Ru Paul's Drag Race UK,  he's proven he was born to be an entertainer! Don't miss him on the road in 2020/21 when he brings his unique act to you.

Sound good to you? Share this page on social media and let your friends know about Alan Carr at Kings Theatre.