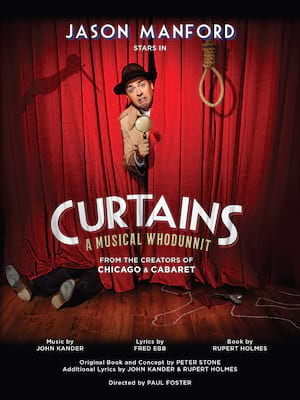 It's Murder putting on a new musical, literally!

When the leading lady of a brand new Broadway musical is found dead on opening night, the cast and crew draft in detective (and musical theatre fan) Frank Cioffi to solve the case. With everyone in the company under suspicion, will Frank be able to suss out the culprit before opening night? Or is it curtains for everyone?

Starring Jason Manford Carley Stenson and Ore Oduba*, this uproarious musical whodunnit is a smorgasbord of murder, mystery, and music that'll keep the audience on its tapping toes!

Written by Rupert Holmes and with music and lyrics by John Kander and Fred Ebb (the minds behind Cabaret and Chicago) Curtains first premiered on Broadway in 2007 with Fraiser's David Hyde Pierce as Frank, winning him a Tony Award in the process.

The cast were brilliant, Sang there heats out, really good performance. Given... more

Sound good to you? Share this page on social media and let your friends know about Curtains at Kings Theatre.