Sorry! You missed On Your Feet! at Kings Theatre 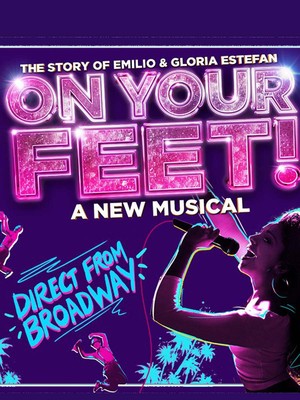 Why See On Your Feet!?

Get On Your Feet Britain!

On Your Feet!, the 2015 Broadway hit is heading across Britain on tour after a smash-hit run on London's West End. Telling the story of Latin music heroes Gloria and Emilio Estefan, and their rise to fame from their childhood in Cuba, to the streets of Miami, to winning over 26 Grammy Awards! Based on the duos iconic music, the musical features hits like "Rhythm is Gonna Get You", "Conga", "Get On Your Feet", "Don't Wanna Lose You Now" and "1-2-3". When it debuted on Broadway the production was nominated for the Tony award for Best Choreography and was directed by Kinky Boots and Hairspray's Jerry Mitchell.

Although Gloria's path to stardom was not easy, with a huge car crash debilitating her for over a year, the music rocket defeated the odds and rose to stratospheric heights. The songstress has not only sold over 100 million records, but also has a star on the Hollywood Walk of Fame and received the AMA Lifetime Achievement Award.

The STOry OF Gloria and Emilio

Gloria Estefan began her career in the band Miami Sound Machine, who released their debut album Live Again/Renancer in 1977. With their Latin-influenced synth-pop and disco, the group hit the big time in the eighties with tracks including 'Rhythm is Gonna Get You', 'Conga' and 'Dr. Beat'. Estefan later pursued a highly successful music and movie career, earning seven Grammys in the process, and miraculously overcame a potentially paralysing broken back in 1990.

All this time she was supported by her husband Emilio, a massive name in the Latin music industry, who also helped shape the careers of Ricky Martin, Shakira and Jennifer Lopez.

My friends and I had a wonderful afternoon today. We loved the story, the... more

Sound good to you? Share this page on social media and let your friends know about On Your Feet! at Kings Theatre.