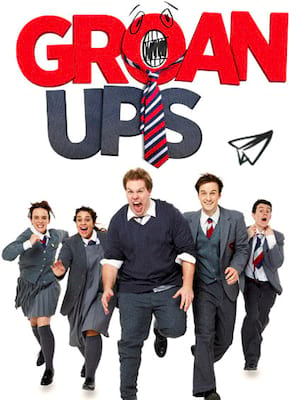 Growing pains of the most painfully funny kind

From the minds behind bonkers West End and Broadway smash The Play That Goes Wrong and The Comedy About A Bank Robbery comes this brand new show inspired by those halcyon days spent at school. It's an anarchic look at the frankly hilarious hurricane of emotions that is adolescence, from crushes to spots and more. Don't miss out as this mad-cap comedy takes on stages around the UK!

The company's first new play since 2016's 'Bank Robbery, Groan Ups stars the original Olivier Award-winning cast who trace the journey of a group of school mates from ages six to 30, exploring how our characters and connections form over time. Fusing their trademark slapstick style with just a dash of seriousness, it's a trip down memory lane you might just recognise!

Groan Ups is Mischief Theatre's best play to date. It's all about the... more

Ann: “Plain old funny with a touch of pathos”

This is very, very funny. The characters, the timing (both physical and... more

Sound good to you? Share this page on social media and let your friends know about Groan Ups at Glasgow Theatre Royal.